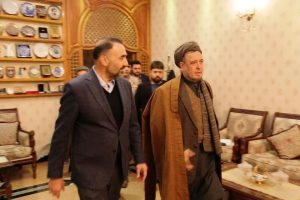 The provincial governor of northern Balkh province and chief executive of Jamiat-e-Islami Ata Mohammad Noor has reportedly stepped up efforts to establish a new political consensus.

Noor ina  statement said he had a meeting with the deputy chief executive of the unity government Haji Mohammad Mohaqiq in this regard on Tuesday.

The statement further added that issues such as the ongoing situation, deteriorating security, political challenges and issues were discussed during the meeting.

According to Noor, he reached to an agreement with Mohaqiq to step up efforts to bring the political parties and movements as well as the new political coalition under one roof to establish a new political consensus.

He said the two sides also discussed the future programs for the new political coalition.

It was expected that the new coalition will soon announce and declare its presence in a large gathering in the capital  few months earlier.

But no further developments have been noted during the recent years with the first vice president and a key member of the coalition being out of the country for the past several months.