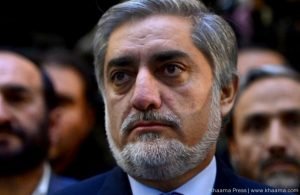 Chief Executive Officer Dr. Abdullah Abdullah has assured that the NATO troops pullout will not leave a security vacuum.

Speaking during a ceremony in Marshal Mohammad Qasim Fahim Officers Academy in Kabul, Dr. Abdullah said the capabilities of the Afghan national security forces are growing each day.

Dr. Abdullah said the ambitions of the anti-government armed militant groups to crash the government will never turn into a reality.

The remarks by Dr. Abdullah comes as the NATO-led international coalition forces are due to end their combat mission in Afghanistan by the end next month.

However, NATO will launch a new non-combat mission – Resolute Support mission to train, advise and assist Afghan security forces as of January 1, 2015.

The new NATO mission will be launched after the government of Afghanistan signed the bilateral security agreement with Washington and Status of Forces Agreements with NATO which gives a legal framework for the presence of US and NATO forces in Afghanisan beyond 2014.