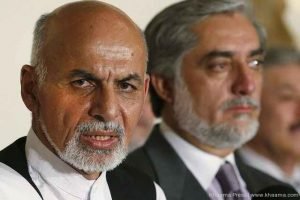 New tensions have flared between President Mohammad Ashraf Ghani and Chief Executive Officer (CEO) Abdullah Abdullah with reports suggesting the minister-designate for Ministry of Defense Gen. Afzal Ludin has given up his nomination due to the reported differences.

Gen. Ludin issued a statement on Wednesday confirming his decision to give up his nomination in a bid to maintain unity among the Afghan people.

However, sources close to CEO Abdullah have said the latest tensions have flared due to the appointment of Chief of the Army Staff and head of the committee for electoral reform.

In the meantime, deputy spokesman for the Chief Executive Office, Asif Ashna, told BBC Farsi that the US Secretary of State John Kerry called Dr. Abdullah to hold talks on better administration of the unity government agreement.

Ashna further added that the US ambassador to Afghanistan and US Special Representative for Afghanistan and Pakistan also held talks with Dr. Abdullah regarding the “comprehensive implementation” of the agreement concerning the unity government.

The unity government was formed last year with the interference of John Kerry as Afghanistan was put on the brink of collapse due to the controversial presidential election which was marred by massive fraud allegations.