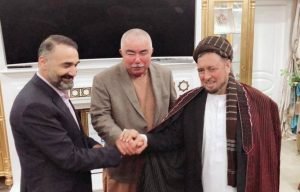 The new political coalition of prominent political figures has warned of dire consequences over the arrest of a cop commander of Junbish Milli led by Vice President General Abdul Rashid Dostum.

The Coalition for the Salvage of Afghanistan, comprising of Ata Mohammad Noor, Mohammad Mohaqiq, General Abdul Rashid Dostum, and other prominent political figures, issued a statement after the arrest of Commander Nizamuddin Qaisari.

The statement further added that the government should take immediate steps to ascertain the fate of the detained commander and the circumstance surrounding his arrest.

The coalition warned that any recklessness by the government would result to widespread movements and rallies.

The members of the coalition also added that the persistent reckless and irresponsible acts by the government would force the people to withdraw support and start larger civil uprisings and protests.

The political coalition warns that any move by the government to suppress such movements would have dire consequences and the government would remain responsible for the outcome.