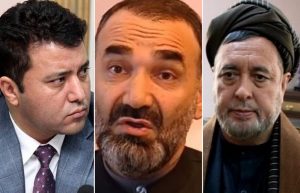 The members of the new political coalition, Coalition for the Salvage of Afghanistan, on Sunday shared their demands regarding the cases of Gen. Abdul Rashid Dostum and Nizamuddin Qaisari.

The leaders of the political coalition, Ata Mohammad Noor and Mohammad Mohaqiq, appeared in a press conference with Enayatullah Babur Farahman, the Chief of Staff Gen. Dostum’s Office, to declare their stance regarding the recent political upheavals.

The members of the political coalition once again criticized the government for its recent steps, specifically the arrest of Nizamuddin Qaisari and preventing the return of Gen. Dostum from Turkey.

Noor said the government must take immediate steps to resolve the case of Gen. Dostum as he emphasized that no one has the right to keep a person in exile.

He also called the detention of Nizamuddin Qaisari by security forces a move against the law.

Another member of the coalition Mohammad Mohaqiq said Gen. Dostum is being kept in exile without the decree or verdict by any court or the parliament.

He said “Until now we were demanding that Gen. Dostum must return but after this we are saying that we will bring Gen. Dostum back to the country.”

The Chief of Staff Gen. Dostum’s Office Enayatullah Babur Farahmand warned that the protests and unrest would expand to the other provinces if immediate actions are taken to free Nizamuddin Qaisari.

He also accused the government of paving the way for the expansion of the Taliban activities in the north, insisting that Nizamuddin Qaisari has been jailed because he was fighting the Taliban militants.