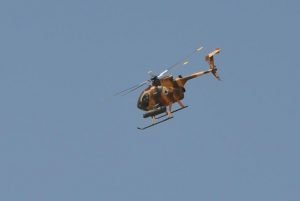 At least twenty five militants affiliated with the Islamic State of Iraq and Syria (ISIS) terrorist group were killed in the latest airstrikes conducted in eastern Nangarhar province of Afghanistan.

According to the officials of the 201st Silab Corps of the Afghan army in the East, the latest airstrikes were carried out on Tuesday in the vicinity of Achin district.

The officials further added that the militants and their hideouts were hit during the raids in Mamand Shin area, leaving twenty of the loyalists of the terror group dead.

According to Silab Corps officials, the civilians and military personnel did not suffer any casualties in the airstrikes.

This comes as similar airstrikes were carried out in this province on Sunday targeting compounds belonging to the Islamic State of Iraq and Syria (ISIS) terrorist group loyalists.

The airstrike was carried out in the vicinity of the restive Haska Miina district, leaving at least six fighters of the group dead or wounded.