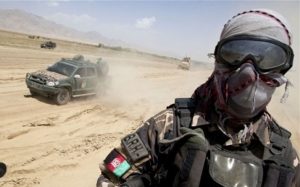 The Afghan Intelligence, National Directorate of Security (NDS), says a network of the Taliban group was busted in Kabul city during the operations of the NDS forces.

According to a statement released by the National Directorate of Security (NDS), at least nine Taliban group members were also arrested during the operations of the NDS forces

The statement further added that the militants were involved in destructive activities, including roadside bombings and target killings of the officials and security personnel.

The detained individuals were also collecting information regarding the security institutions and the activities of the security personnel, NDS added in its statement.

This comes as the Afghan Intelligence said last week that 26 militants having links with the Islamic State of Iraq and Syria (ISIS) terrorist group were arrested during separate operations.

According to NDS, the militants were attempting to carry out a series of attacks during the Ashura Day in Kabul city.

An Afghan journalist who feared death threats and fled...

The investigation has revealed that the plot to target...