Negotiations continue with Taliban to end violence in Helmand 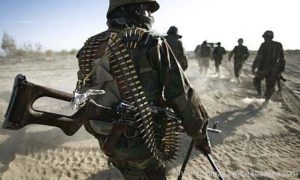 Negotiations between Taliban militants and Afghan officials continue in southern Helmand province of Afghanistan in a bid to end the violence which sparked over a month ago.

Dozens of people including Afghan security forces members and civilians have killed following heavy clashes between the Taliban militants and Afghan forces which sparked late in June.

Local residents in Sangin, Kajaki, Mosa Qala and Nawzad districts are saying that sporadic clashes still take place between Afghan forces and Taliban militants, despite the officials claimed that Taliban suffered heavy casualties and were forced to retreat.

In the meantime, Gen. Sherzad said peace negotiations are currently focused on Sangin district and talks on other districts will be held later.

He said their peace talks with tribal elders & the militants had a positive impact on the security situation and security incidents in Sangin & other districts had declined but further improvement required some more time.

According to Gen. Sherzad, the Taliban commanders have said they are willing to join peace process and have admitted that they are tired of the war and violence.