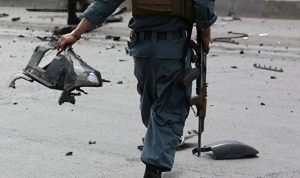 The Special Forces of the Afghan Intelligence, National Directorate of Security (NDS), acted quick to suppress a major and coordinated suicide attack launched by the militants in Jalalabad city.

The provincial government media office said at least two of the suicide bombers managed to detonate their explosives while a vehicle-borne improvised explosive was discovered before the militants manage to detonate it.

The source further added that one of the suicide bombers was shot dead while another bomber detonated his explosives.

According to the provincial government, one of the suicide bombers who was attempting to intrude into the medical faculty was shot and he detonated his explosives after sustaining injuries.

The provincial government also added that the attack has inflicted casualties but there are no reports available regarding the exact number.

In the meantime, the provincial public health directorate officials are saying at least fourteen people wounded in the attack have been shifted to the hospital for the treatment.

No individual or group has so far claimed responsibility for the attack.

In the meantime, the provincial government said at least 12 people were wounded in an explosion in a recreational area in Chaparhar district at around 9 am local time.