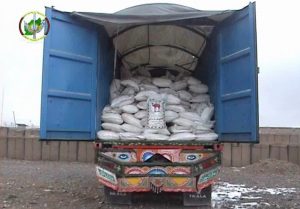 At least 15,000 kg of ammonium chloride belonging to Haqqani terrorist network were seized by the Afghan intelligence operatives from eastern Paktia province.

The Afghan Intelligence – National Directorate of Security (NDS) said Thursday that the Haqqani network was looking to use the chemicals for the production of homemade explosives including suicide vests and Improvised    Explosive Device (IED).

A statement by NDS said the chemicals were placed in 300 bags and the network was looking to transport them to Paktia province using a truck.

The statement further added that an individual has been detained in connection to the smuggle of the chemicals who is currently in the custody of intelligence operatives for further investigation.

NDS said the detained individual has been identified as Mohammad Daud Khan who has confessed that he was involved in the smuggle of chemicals to Paktia province for terrorist related activities.

The Haqqani terrorist network is accused of staging numerous cross-border attacks from their base in tribal regions of Pakistan, including the 19-hour siege at the US Embassy in Kabul in Septemebr 2011.

The US Department of State designated the Haqqani Network as a Foreign Terrorist Organization on September 7, 2012.