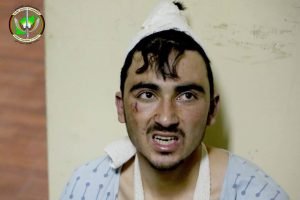 The Afghan Intelligence has released the photo of a suicide bomber who was arrested alive during an attack on the army base in capital Kabul on Monday.

The National Directorate of Security (NDS) released the photo of the would-be suicide bomber late on Monday and hours after the defense officials said one of the attacker has been arrested by the security forces.

A group of at least five insurgents launched a coordinated attack on a base of the 111th division of the Afghan army in the early hours of Monday morning.

The ministry of defense spokesman Gen. Dawlat Waziri said a group of five insurgents launched a coordinated attack on a compound of the 111th division of the army in Qargha area and at least two of the suicide bombers carried out a suicide attack, two of them were shot dead and another one has been arrested alive.

According to Gen. Waziri, at least eleven Afghan soldiers also lost their lives in the attack and and sixteen others have sustained injuries.

Yesterday’s attack was the the third largest attack in capital Kabul since 20th January and after a group of insurgents launched an attack on Intercontinental Hotel.