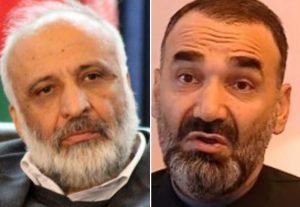 The Jamiat Islami Chief Executive in a statement said the ongoing situation of the country was discussed during the meeting with the NDS Chief Masoom Stanikzai.

Noor did not provide further details regarding the meeting but added that the NDS Deputy Chief Ebadullah Ebad and some other senior intelligence officials had also participated in the meeting.

In the meantime, the 209th Shaheen Corps of the Afghan Military in the North said a security meeting was also organized in Governor’s Compound.

According to a statement released by 209th Shaheen Corps, the meeting was chaired by NDS Chief Stanikzai and Balkh governor Mohammad Ishaq Rahgozar.

The statement further added that the 209th Shaheen Commander Gen. Mohammad Wali Ahmadzai had also participated in the meeting along with some other military and government officials.