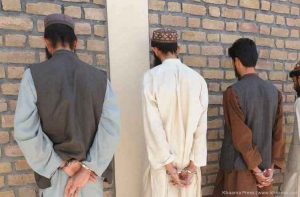 The Afghan Intelligence – National Directorate of Security (NDS), said Monday that Mawlavi Sheikh Ahmad, also known as Haji Wadan, was arrested during an operation from the 7th police district of Kandahar city.

The statement further added that Mawlavi Ahmad had returned form Quetta city of Pakistan to coordinate further attacks and was arrested by the Afghan intelligence operatives.

NDS also added that two suicide bombers recognized as Ghulam Rasool and Hamidullah, who are residents of Jawzjan and Herat provinces, were arrested during an operation from Kandahar-Uruzgan highway.

The two suicide bombers were appointed by Mullah Payenda based in Quetta city to carry out attack in central Uruzgan province, NDS said.