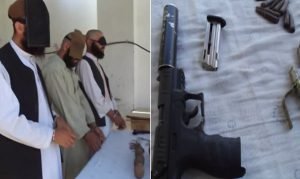 At least three Taliban militants assigned by the group to kill local government officials and tribal elders as well as religious clerics were arrested from southern Helmand province.

The National Directorate of Security (NDS) said the three militants were arrested were assigned by Taliban group leader Mullah Nemat to carry out the assassination of the officials, elders and religious clerics.

A statement by NDS said the militants were planning to carry out the assassinations in Nad-e-Ali district before they were arrested by the security forces.

The intelligence operatives confiscated a pistol with a silencer and 10 hand grenades from the detained militants, NDS said.

NDS said numerous assassination attempts against the local officials, elders and religious clerics were foiled with the arrest of the three militants assigned for the task.