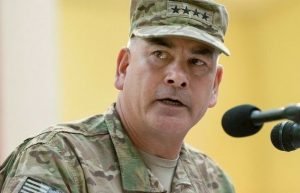 In a telephonic interview with USA TODAY from Kabul, Gen. John Campbell said that maintaining the current force of 9,800 U.S. troops to train Afghan forces and conduct counter-terrorism raids is vital, and that the scheduled reduction to 5,500 by Jan. 1, 2017, should be put off as long as possible.

“My intent would be to keep as much as I could for as long as I could,” he said. “At some point it becomes physics. I’m going to have to get them out.”

Gen. Campbell will be Washington soon to brief senior leaders on the security situation in Afghanistan and troop levels required for their missions.

“My job as commander on the ground is to continually make assessments,” he said. “Every time I’ve gone to the president and said, ‘I need X,’ I’ve been very, very fortunate that he’s provided that. So he’s been very flexible. It’s actually been conditions based as we’ve gone forward.

“If I don’t believe that we can accomplish the train, advise and assist and the (counter-terrorism) missions, then I owe it to the senior leadership to come back and say, ‘Here’s what I need.’ If that’s more people, it’s more people.”

This comes as the Pentagon’s quarterly assessment of security in Afghanistan this month noted that in “the second half of 2015, the overall security situation in Afghanistan deteriorated with an increase in effective insurgent attacks and higher (Afghan security force) and Taliban casualties.”