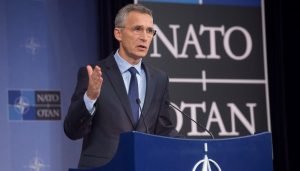 The NATO Secretary General Jens Stoltenberg hailed the Afghan people and the Afghan National Defense and Security Forces for their bravery and resilience amid a tough situation the country is facing.

He said we will be joined by Afghanistan’s Acting Defence Minister, who will brief on the security situation and on the progress his government is making on essential reforms.

“The last few weeks have been tough in Afghanistan, with a number of brutal and senseless attacks. Such as today’s attack on Shamshad TV. But at the same time, the Afghan Security Forces have shown bravery, determination and increasing capability,” Stoltenberg said.

He also added that the Afghan people continue to demonstrate a remarkable resilience and hope for peace.

According to the Secretary General, around 13,000 troops from 39 different countries currently serve in our Resolute Support Mission. The United States is already increasing its commitment as part of the new South Asia Strategy.

“And many other Allies and partners will also send more troops in the months to come. To support Afghanistan’s efforts against international terrorism and for peace and reconciliation,” he added.