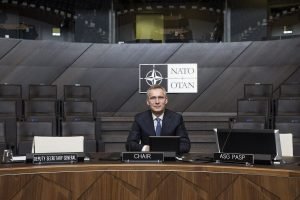 The NATO Secretary General Jens stoltenberg welcomed the announcement by President Mohammad Ashraf Ghani for a ceasefire with the Taliban group.

Speaking during a press conference head of the Defense Ministeriala, Stoltenberg said “I welcome the announcement of a ceasefire made by President Ashraf Ghani and the Government of National Unity. This is a positive step forward on the path to peace.”

This comes as the NATO-led Resolute Support and US Forces Commander General John Nicholson had earlier said that the U.S. Forces-Afghanistan will honor the Government of the Islamic Republic of Afghanistan ceasefire with the Taliban, announced by H.E. Afghan President Ashraf Ghani, on June 7.

“We will adhere to the wishes of Afghanistan for the country to enjoy a peaceful end to the Islamic holy month of Ramadan, and support the search for an end to the conflict,” said Gen. John Nicholson, U.S. Forces-Afghanistan and the NATO-led Resolute Support commander.

The US Forces in Afghanistan says the ceasefire does not include U.S. counterterrorism efforts against IS-K, Al-Qaeda, and other regional and international terrorist groups.

This comes as the Afghan Army of Chief of Staff Gen. Mohammad Sharif Yaftali had earlier said that the Afghan armed forces honor the ceasefire announced by President Mohammad Ashraf Ghani.

President Ghani announced earlier today that the government has declared a ceasefire with the Taliban, starting from 27th of the holy month of Ramadan, insisting that the ceasefire is being declared in response to the religious scholars Fatwa issued on Monday where the ongoing conflict and violence was prohibited in the light of the principles of Islam.

A four-star general in the United States Air Force...

Taliban’s Ministry of Higher Education on Saturday issued a...

According to a statement released on Saturday, the renowned...