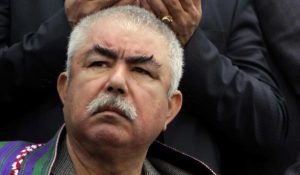 The NATO-led Resolute Support Mission in Afghanistan denied that permission was granted by the alliance to prohibit the landing of the plane of the first vice president of Afghanistan General Abdul Rashid Dostum to Mazar airport.

The alliance also rejected any involvement of the Germany forces based in Afghanistan in the issue.

A spokesman for the alliance Capt. William K. Salvin in a statement said “Afghan First Vice President Dostum’s aircraft was not denied permission to land at Mazar-e-Sharif airport by German Forces.”

“It is not the business of the Resolute Support Mission to get involved in internal Afghan Government Affairs,” Capt. Salvin added.

This comes as earlier reports indicated that the plane was forcefully diverted as it was carrying the first vice president from Turkey to Mazar-e-Sharif city.

The office of the first vice president in a statement stated that all reports suggesting that the plane was forcefully diverted are false.

The statement further added that the vice president is still based in Ankara city and no decision has been taken regarding his return in the near future.

Dostum is in Turkey for the treatment with President Ghani earlier saying that the first vice president has left the country after receiving approval and permission from the Attorney General Office.

The vice president of the country left for Turkey amidst ongoing controversies regarding his involvement in the alleged sexual abuse of his rival Ahmad Khan Ishchi, the former provincial governor of Jawzjan province.