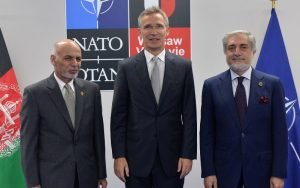 The leaders of the North Atlantic Treaty Organization (NATO) reaffirmed long term support to Afghanistan as the alliance met in Poland to discuss the security situation in Afghanistan.

Together with Afghanistan’s President Ghani and Chief Executive Abdullah, they discussed the security situation in Afghanistan and the reform process carried out by the Afghan National Unity Government, according to a news release by teh alliance.

They also took stock of the performance of the Afghan National Defence and Security Forces, and laid out the way ahead for their continued support for Afghanistan.

“Afghan security forces are now responsible for security across the whole country,” NATO Secretary General, Jens Stoltenberg said. “They are defending the Afghan people with dedication and courage; we continue to train, advise and assist them; but Afghanistan still faces serious instability and violence; so our continued political, military and financial engagement is of great importance,” he added.

Mr. Stoltenberg highlighted three key decisions made. “First, we agreed to sustain our Resolute Support Mission beyond 2016, through a flexible, regional model. Second, we received firm national commitments to continue funding Afghan security forces through 2020. And third, we reaffirmed our support for a long-term political partnership and practical cooperation with Afghanistan,” he said. “So our message is clear: Afghanistan does not stand alone; and we are committed for the long haul,” he added.

Leaders from Japan and South Korea, as well as representatives from key international community partners, including the United Nations and the European Union, also attended the meeting.