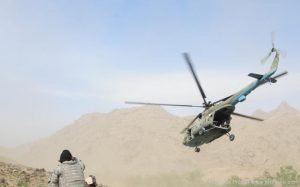 According to local authorities in eastern Nangarhar province of Afghanistan, a helicopter belonging to Afghan forces has crashed in this province.

In the meantime, local residents in the area are saying that the helicopter crashed in Haidar Khan area and caught fire immediately after the crash.

There are no reports regarding the casualties so far.

A local security official in Nangarhar province said that the helicopter crashed during counter-narcotics operation.