NATO endorse concept of operation for new mission in Afghanistan 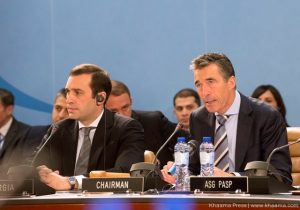 NATO secretary general Anders Fogh Rasmussen said the alliance is getting prepared for the new mission after the new concept of operations was endorsed.

Rasmussen said the new mission will have a limited regional scope in Afghanistan including capital Kabul, North, West, South and East parts of the country.

He said the main focus of the mission will be the Afghan national security institutions and core level of Afghan army and national police.

In the meantime NATO secretary general Anders Fogh Rasmussen said that NATO will be responsible for the security of the future trainers, advisers and forces, and the exact number of troops to remain in the country post 2014 has not been finalized yet.

He said, “Over the last 11 years we have given the Afghans the space to build their future. With this new mission, we will continue to support them. But ultimately it is for the Afghans to determine their own future. That is what security transition is all about and we are about to reach a key milestone in that journey.”

The defense secretary said US remains committed to support Afghanistan in the long term by remaining the largest contributor and lead nation in the new NATO mission.

In regards to the upcoming presidential election, US defense secretary Chuck Hagel insisted that an open, free and fair election is an essential part of any future commitment.