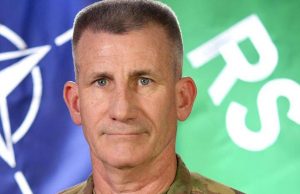 The Commander of the NATO-led Resolute Support Mission and the US Forces in Afghanistan General John Nicholson reaffirmed the international community and coalition forces support to President Asrhaf Ghani’s ceasefire initiative and offer for peace talks.

“The international community and coalition forces respect and strongly support H.E. President Ghani’s ceasefire initiative during these holy days and the offers of peace talks,” Gen. Nicholson said in a statement released on the eve of Eid Al-Fitr.

He said “We hope these steps by the National Unity Government will be an opportunity towards bringing peace, stability, and prosperity to the great nation of Afghanistan.”

“We believe this is the best opportunity for the Taliban to accept the peace offer, end the bloodshed, and be part of the solution to bring peace and a better life to his nation and the children of this country,” the NATO commander added.

This comes as both the Afghan government and the Taliban militants announced temporary ceasefire on the occasion of Eid Al-Fitr.

The Taliban group on Saturday announced that the leadership of the group has decided to declare a ceasefire on three days of Eid Al-Fitr, an announcement which was apparently made in response to President Ghani’s ceasefire declaration late last week.

The announcements regarding ceasefire was widely welcomed in Afghanistan as well as on international level as efforts are underway to end the ongoing conflict through peaceful means.