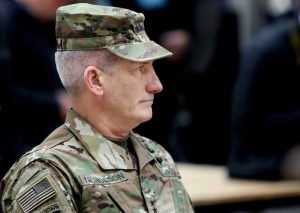 The commander of the NATO-led Resolute Support mission in Afghanistan strongly condemned a deadly attack in capital Kabul this afternoon.

Resolute Support strongly condemns today’s enemy attack that targeted a peaceful protest and killed dozens of civilians and injured many more, the alliance in a statement said.

“Our condolences go out to those who are affected by today’s attack,” said Resolute Support Commander, Gen. John W. Nicholson. “We strongly condemn the actions of Afghanistan’s enemies of peace and remain firmly committed to supporting our Afghan partners and the National Unity Government.”

The Taliban group rejected hand in the attack but the Islamic State of Iraq and Syria (ISIS) terrorist group claimed it has carried out the attack to target the Shiite gathering.

The Ministry of Public Health (MoPH) officials said at least 61 people lost their lives and around 207 others sustained injuries in the attack.

The incident took place as hundreds of thousands of people had gathered in Deh Mazang area to protest against the TUTAP project.