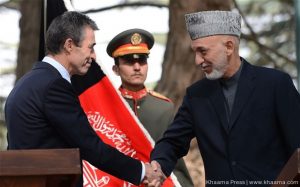 Anders Fogh Rasmussen on Monday arrived in Afghanistan and met with the Afghan president Hamid Karzai and a number of the Afghan youths.

He said, “I strongly condemn endorsing suicide attacks and there is no justification for such a terrorist attacks.”

Karzai said, Allama Tahir Ashrafi not only boycotted the conference but also issued a Fatwa saying that the suicide attack is permitted in Afghanistan and apparently Afghanistan will have results from his remarks.

He said Pakistani Ulema chief’s remarks clarifies the truths on which the Afghan government has been emphasizing. “we heard from their own language and we hope that the situation will change.” Karzai said.

The regional Islamic conference was due to be organized by 15 March this year and according to Karzai religious scholars from the two nations had also agreed for the participation of Taliban representatives in the conference but Pakistani Ulemas said that they boycott the conference since the Afghan government wants to use the conference against the Taliban group.

While pointing towards the killings of Hazaras in Quetta, Shias in Karachi and massacre in Khair Pakhtunkhwa, president Karzai warned that the situation was going out of the control of everyone.

“Apparently we see that no practical action is taken to fight the terrorism as unfortunately we are witnessing that innoncent Pakistanis are also suffering from terrorism.” Karzai added.

In the meantime NATO secretary general said that they have repeated requested Pakistan to boost fight against the terrorism in Pak-Afghan bordering regions.

He said NATO needs positive and creative cooperation from the Pakistani side.