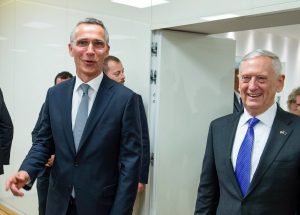 Stoltenberg and Mattis are expected to meet with the Afghan officials during visit to Afghanistan.

This is the first visit by Mattis and Stoltenberg to Afghanistan after the announcement of the new US strategy for Afghanistan and South Asia.

The Afghan officials had earlier expressed optimisms that the new strategy will increase the role of US as well as NATO in support of Afghanistan and Afghan security forces.

President Trump last month unveiled the new US strategy for Afghanistan and the South Asia region, emphasizing on continued efforts to eradicate terrorism and fight against menace of terror threatening the region and the world.

He said “For its part, Pakistan often gives safe haven to agents of chaos, violence, and terror.  The threat is worse because Pakistan and India are two nuclear-armed states whose tense relations threaten to spiral into conflict.  And that could happen.”

The US President further added that the next pillar of the new strategy is to change the approach and how to deal with Pakistan, emphasizing that we can no longer be silent about Pakistan’s safe havens for terrorist organizations, the Taliban, and other groups that pose a threat to the region and beyond, emphasizing that Pakistan has much to gain from partnering with our effort in Afghanistan.  It has much to lose by continuing to harbor criminals and terrorists.