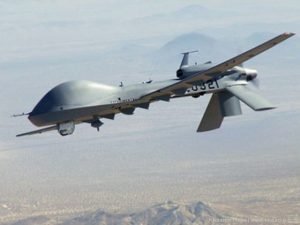 At least seven suspected militants were killed following a NATO airstrike in eastern Nangarhar province of Afghanistan on Saturday.

Provincial police department media office following a statement confirmed the report and said the the militants were killed in a drone strike on Saturday morning.

The statement further added that the airstrike was carried out in Lalpoor district around 9 am local time, leaving seven militants dead.

Local security officials quoted in the statement said that no civilian casualties were reported in the airstrike.

Anti-government armed militant groups yet to comment regarding the incident.

Nangarhar is among the relatively peaceful provinces in eastern Afghanistan, however militants have recently increased their insurgency activities in a number of its districts.

One thought on “NATO airstrike kill 7 militants in Nangarhar province”