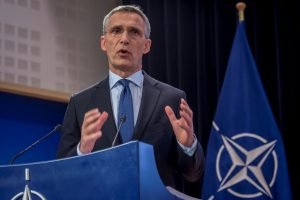 The North Atlantic Treaty Organization (NATO) is aiming to increase the number of the international forces in the framework of the train, advise, and assist mission to close to 16,000 during the year 2018.

NATO Secretary General Jens Stoltenberg told reporters in Brussels on Tuesday that “At least twenty-eight Allies and partners are increasing their troop contributions to our training mission in Afghanistan.”

Stoltenberg further added “We are aiming to have close to 16,000 personnel there this year. Up from around 13,000 last year.”

“This is a clear sign of our continued commitment to Afghanistan’s security,” he added.

Stoltenberg had earlier said that the new international forces will train, advise, and assist the Afghan Special Operations forces.

This comes as the Afghan government and its international allies are optimistic regarding the growing capabilities of the Special Operations forces.

The officials are saying that the Special Forces have had major achievements and impacts in the fight against terrorism.

The government together with the international allies of Afghanistan are looking to increase the number of the Special Forces as well as the Afghan Air Force by three fold until 2023.