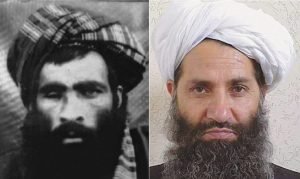 The top Taliban leader, Syed Mohammad Tayyab Agha, reportedly asked Akhundzada in a letter which was obtained by Gandhara, a news portal close to RFE/RL.

“How can the Taliban leadership, now camped in Pakistan, demand that people in Afghanistan or elsewhere pledge allegiance to them?” he wrote, confirming that the insurgent movement’s leaders still operate from safe havens in Pakistan. “Can we consider such acts in accordance with Islam?”

Agha relinquished his position as head of the Taliban’s political office in Qatar last year and has sharply questioned key Taliban ideological tenets.

In the letter, he urges Akhundzada to give up the title of Amir al-Muminin, or Leader Of The Faithful, and to drop the Taliban’s formal name, the Islamic Emirate of Afghanistan.

“It will be better to employ the term ‘movement’ instead of ‘emirate’,” he wrote, arguing that without either control over most of the country including the Afghan capital, Kabul, or recognition as a legitimate government it is impossible for the Taliban to pose as Afghanistan’s legitimate government.

“A reliance on media propaganda and forming [shadow] government institutions, control of rural territories, and most of the movement’s leadership being in a foreign country [Pakistan] doesn’t amount to a [legitimate] government in our country,” he wrote. “Instead of Amir al-Muminin, you should call yourself The Amir or leader.”

Questionning the Taliban’s current strategy, which mainly relies on overrunning rural territories and complex urban attacks that often result in a high number of civilian casualties, Tayyab Agha urged Akhundzada “You should give up using violence and intimidation to force people to pledge their allegiance to you as the commander of the faithful until you can meet all the requirements [outlined in Islamic Shari’a law].”

“All the mujahedin fighters should be ordered to cease killing our opponents inside mosques and stop killing prisoners,” he wrote. “Stop killing people under suspicion traveling on roads. Stop bombing bridges, roads, and other similar places. Stop killing aid and construction workers who are helping our nation and building our homeland.”

This comes as the Afghan officials have long been critizing Pakistan for allowing the Taliban group leaders to use its soil for executing attacks in Afghanistan which causes most of the casualties to the ordinary Afghan civilians.

However, Pakistan has repeatedly rejected the allegations although Pakistan’s foreign affairs adviser Sartaj Aziz admitted earlier this year that the country has influence on the group and could use certain leverages to force the group to join peace talks.