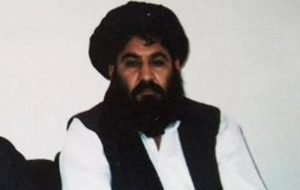 The newly appointed leader of the Taliban group Mullah Akhtar Mohammad Mansoor has issued a statement following a coordinated attack on Kunduz city.

Mullah Mansoor’s call to refrain from harming civilians and their properties while ruling out retribution of the government employees and security personnel provided that they abandon all negative thoughts, message of peace and full a credit of the fall of the city to Taliban militants, are some of the important points made in his statement.

However, the remarks by Mullah Mansoor comes as the Taliban militants have been blamed in a series of activities aimed at harming the civilians including an attack on a radio station apparently managed by women.

The attack on Roshani Radio Television by Taliban militants sparked an outrage after the station was torched following the fall of the city.

NAI Organization which supports open media in Afghanistan strongly condemned the attack on the Radio Station, calling it an evil and brutal act.

The organization expressed deep concerns regarding the security of the media workers and journalists in the city and called on the government to take all necessary measures to ensure their security.

In parts of his state Mullah Mansoor called on the Afghan government to openly admit its failure and stepped forward to rule out the group was supported by any foreign intelligence in coordinating and conducting the attack.

However, the senior security officials said the Afghan security forces retreated from the city in a bid to prevent civilian casualties.

The deputy chief of the Afghan National Army Gen. Murad Ali Murad appeared in a press conference earlier tonight and said the Afghan security forces did not fully respond to Taliban attacks as the militants have taken positions in residential houses and markets.

Gen. Murad further added that the Afghan security forces fully deployed in the outskirts of the city and promised that the control of the city will be taken back from the militants soon.

Leader of the so-called anti-Taliban resistance front and son of the slain Ahamd Shah Masoud, Ahmad...