Mojaddedi: President Ghani has no experience of governance 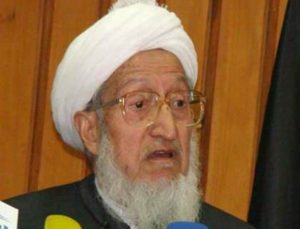 Professor Sibghatullah Mojaddedi, the former President of Afghanistan and a Jihadi leader who backed the incumbent President in his election campaign and asked the nation to vote for him, apparently regrets his support.

He has said that President Mohammad Ashraf Ghani has no experience of governance.

Mojaddedi has told Ariana News in an interview published on its website on Thursday that the incumbent President reached to power because of his support.

According to Mojaddedi, the country would move towards crisis and the situation would be out of control if fundamental reforms are not made in the government.

Mojaddedi seemed doubtful over the ongoing efforts for peace talks with Taliban saying that Pakistan’s spy agency would continue shedding the blood of soldiers and civilians in Afghanistan.

He has warned Islamabad to eject its hand of interference from Afghanistan or he will announce ‘Jihad’ against Pakistan as it was declared against the former Soviet Union.

Thousands of people took to the streets on Friday...

According to Reuters, there will be more clashes between...

The United States on Thursday pledged to continue assisting...