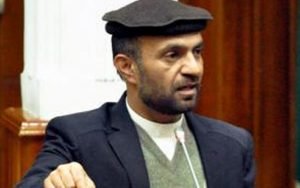 First Deputy of Wolesi Jerga or the Lower House of Parliament claims that government only targets Taliban when there are internal clashes among militants in Nangarhar.

“When there is a clash between Taliban and Daesh, then Taliban are bombed and Daesh is not,” Haji Zahir Qadir said during Monday’s session.

While expressing concern over the deteriorating security situation in Nangarhar province, MP Qadir added that government has issued cards to a number of people who belong to Lashkar-e-Islam and 90 percent of them have been fighting in Achin and Nazyan districts.

The lawmaker who blames government for backing Daesh also had a document in his hands during his speech and said “this is one of the several evidences in this regard.”

Zahir Qadir further said that a number of these people got killed in clashes with security forces and the government-issued cards were recovered from their pockets.

While reading the document, Zahir Qadir said the document states that Lashkar-e-Islam has the responsibility of moving around Daesh militants from Nazyan and Achin districts to Ghanikhil District and from Bati Kot District to Jalalabad.

Qadir said that the issue of helicopters also need to be clarified and the findings be shared with international community.

About a week ago, residents of Hejrat village, located in Surkh Rud District of Nangarhar province, claimed that helicopters landed in their village during night and dropped people wearing black clothes.