Mother’s true love brings baby back to life in Australia 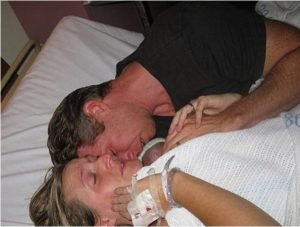 Kate and David Ogg told the rocky story of his life to Jamie after nearly five.

Kate had a premature delivery in Queensland of Australia on March 25, 2010 where she delivered two babies of six months.

After the delivery Emily started wailing but Jamie did not make sound.

That is when about 20 medical staff came around the baby boy and after trying for about 20 minutes they finally give up and saw that the baby was not breathing.

A doctor came to the couple and said that their son could not make it and that there was nothing more they could do to save him.

But Kate who was waiting to see her son from the past six months did not listen to the doctors and started to do everything she could think off at the time her eyes were full of tears.

She begged everyone to leave the room and cuddle her son for the probable last moments.

Kate asked her husband David Ogg to help her warm their son whom the distraught parents wanted to live but he had stopped breathing.

After being in the hug for few moments the true love of mum and dad brought brought the baby back to life.

The doctors were shocked after seeing the miracle. Jamie and Emily are now nearly five years old and living a healthy life. They both love each other.

At least 22 people were killed in India when a bus transporting Indian pilgrims deviated in a mountainous...

On Saturday night, a disastrous fire broke out at a private container facility in Chittagong, Bangladesh,...