Most senior Taliban leader killed after attacking Hesarak in Nangarhar 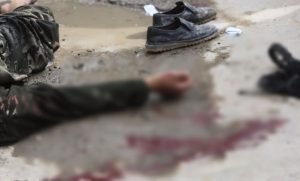 One of the most senior leaders of the Taliban group has been killed shortly after the group launched a coordinated attack in eastern Nangarhar province of Afghanistan.

According to the local officials, the top Taliaban leader, Naeem Khalid, was killed during the fierce clashes in Hesarak district.

Provincial governor’s spokeman Ataullah Khogyani said Khalid was leading the coordiated attack on Hesarak district and was killed in an attack by the Afghan forces.

Khogyani further added taht the Taliban militants suffered heavy casualties during the clashes in Hesarak but did not provide the exact figures, only stating around 100 militants were killed or injured.

The provincial government also added that the Taliban militants have been pushed away from Hesarak district and the situation in the district is currently under the control.

The Taliban militants group in the meantime claim saturday that they have taken control of Hesarak district but the local officials deny the Taliban claims as baseless.

Nangarhar is among the relatively volatile provinces where the Taliban insurgents and militants belonging to the Islamic State of Iraq and Syrai (ISIS) terrorist group are actively operating in a number of its remote districts.

The cooridnated attack by Taliban in Hesarak comes as the Afghan forces launched a major operation nearly a month ago to eliminate the loyalists of ISIS terrorist group from the districts where ISIS terrorists are active including the restive Kot and Achin districts.