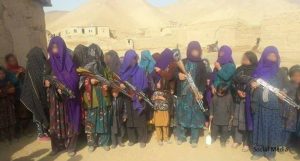 Several women have picked arms against the Taliban insurgents and ISIS loyalists in northern Jawzjan province of Afghanistan.

The anti-ISIS and anti-Taliban uprising by women have taken shape in the remote Darzab district of Jawzjan.

Photographs of the women armed with assault rifles have emerged online on social media websites as the majority of people endorse the courage of the women to form an uprising to resist against the militants who are desperately attempting to expand foothold in the northern parts of the country.

The uprising by women first took shape earlier in the month of November last year in Darzab district.

The uprising was launched under the leadership of a female militia commander to stop the Taliban insurgents seize control of the strategic areas in this province, including Darzab district.

The group led by a 53-year-old woman, Zarmina, has risen to 45 fighters, including mainly Uzbeks and Aimaqs, a Persian-speaking minority in Jowzjan, a multiethnic province that borders Turkmenistan to the north.

The latest uprising by the Afghan women in the North comes as an Afghan woman killed at least 25 Taliban militants late in 2014 to avenge the murder of her son who was a police officer in western Farah province.

The woman, Reza Gul, was forced to pick up arms after her son was shot dead by Taliban militants in front of her eyes.

Her son was leading a small group of police forces in a check post located in a village of Farah province.