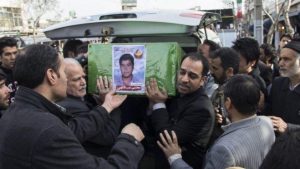 More than two thousand Afghan nationals fighting in the ranks of the Fatemiyoung brigade in Syria have been killed, it has been reported.

According to a cultural official of Fatemiyoung brigade Zohair Mujahid, around eight thousand Afghans have also been wounded in the conflict.

This brigade has given more than 2,000 martyrs and 8,000 wounded for Islam,” he said in an interview with the reformist Shargh newspaper published Saturday.”

The last toll was provided by the veterans organisation in March, which said 2,100 volunteers had died without specifying how many were foreign recruits, according to AFP.

The report by AFP also adds that Tehran offers Iranian citizenship to the families of those foreign fighters “martyred” in the conflicts of Syria and Iraq.

This comes as reports emerged earlier suggesting that the deputy chief executive Haji Mohammad was spotted in a gathering of the Fatemiyoun brigade operating under the Iranian Revolutionary Guard to fight in Syria, a move which has further sparked concerns among the people regarding the fate of the Afghan youths who die and those returning to the country from the Syrian conflict.

Mohaqiq reportedly attended the gathering in Tehran to praise the youths and Fatemiyoun brigade for the turning the conflict in Syria into the favor of the regime in power led by Bashar Al-Assad.

He reportedly hailed the leader of Hezb-e-Ullah Hasan Nasrullha and the commander of the Fatemiyoun brigade for their recent victory in the war.