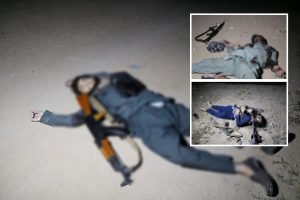 The Afghan Military in the Southeast claims that more than 130 militants were killed during the joint airstrikes carried out by the Afghan and foreign forces in southeastern Ghazni province.

The 203rd Thunder Corps of the Afghan Military said the airstrikes were carried out in the vicinity of Ghazni province but did not elaborate further.

According to a statement released by the Thunder Corps, the Afghan and coalition forces carried out airstrikes on militants’ hideouts in Ghazni, leaving at least 139 dead.

The statement further added that two hideouts of the militants were also destroyed along with a vehicle during the same airstrikes.

This comes as sporadic clashes continue between the Afghan forces and the Taliban militants in the provincial capital of Ghazni province since Friday.

In the meantime, President Ghani has ordered the deployment of further reinforcements in Ghazni amid ongoing sporadic clashes in Ghazni city.

“Tonight I chaired the Commander in Chief’s emergency meeting to take stock of the situation in Ghazni Province. In the meeting I spoke with the Provincial Governor, Commander of 203rd Thunder Corps, and Provincial Police and NDS Chiefs,” President Ghani said late on Sunday night.

He said after detailed review of the reports, the meeting decided that in order to consolidate operational gains, further reinforcements should be dispatched to the province on urgent basis.