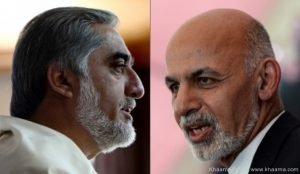 A teacher was among the victims who killed by supporters of Dr. Abdullah in northeastern Badakhshan province of Afghanistan.

According to the local residents, the teacher – Shaida, was returning from the polling station after voting for Dr. Ghani and was attacked by supporters of Dr. Abdullah in Sarqul Yaftal district.

The supporters of Dr. Abdullah also opened fire on a group of people chanting in support of Dr. Ghani in eastern Nangarhar province on Saturday.

At least two people including a child were killed and another one was injured following the shooting spree.

Dozens of people gathered and protested near the house of an Afghan lawmaker whose guards were accused for killing the ordinary civilians.

“Amongst the victims of terrorist attacks are females too. We’ve pledged with their families full expense of treatment,” the electoral campaign team of Dr. Ghani said following an online statement.

Around seven million people participated in runoff presidential vote on Saturday defying threat of violence to elect the next president of Afghanistan.