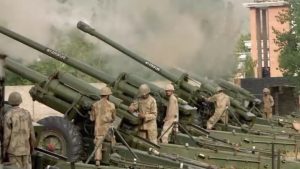 The local officials in eastern Kunar province are saying that the cross-border shelling from the other side of Durand Line continue as dozens of artillery shells were fired in the latest wave of the shelling.

According to the local security officials, more than 100 artillery shells have landed in various parts of Dangam district in the past 24 hours.

The provincial police spokesman Faridullah Dehqan confirmed the latest shelling but added that no one was hurt in the shelling.

According to Dehqan, a number of houses and other properties of the local residents have sustained damages in the latest shelling.

This comes as the local officials in Kunar said last week that more than 80 artillery shells landed in Dangam and Nari districts from the other side of the Durand Line.

This comes as the Chief Executive of the Government of National Unity Abdullah Abdullah on Saturday shared the issue of cross-border artillery shelling on eastern provinces of Afghanistan during his meeting with Pakistan’s National Security Advisor Nasser Khan Janjua.

Earlier, the Ministry of Defense of Afghanistan officials had said the border forces have been granted permission to respond to the artillery shelling from the other side of the Durand Line.