Mojaddedi wants security deal to be signed before elections 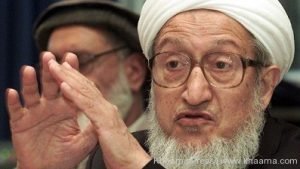 The head of the national grand council (Loya Jirga) Hazrat Sebghatullah Mojaddedi said Saturday that the bilateral security agreement between Afghanistan and United States should be signed before presidential elections.

Mojaddedi told reporters that president Hamid Karzai can’t delay the bilateral security agreement, to be signed after the elections in 2014.

He also added that the bilateral security agreement is comprised of all the demands by the Afghan people, and there is no reason for delaying the pact to be finalized after the elections.

This comes as Afghan president Hamid Karzai said Thursday that the security agreement with United States will not be signed unless an independent and transparent election is not organized earlier next year.

However, US officials insist that the pact should be finalized and signed by the end of the year. “We do not recognize any deadline from the U.S. side,” Aimal Faizi said on Friday.

In the meantime, US Secretary of State John Kerry has warned president Hamid Karzai that all US troops will be withdrawn from Afghanistan next year, if the bilateral security agreement was not signed by the end of this year.

Kerry delivered the message through a telephone call to president Hamid Karzai on Friday, and asked Afghanistan to approve the deal or risk the withdrawal of all U.S. forces next year.