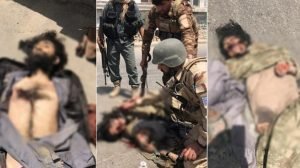 The Ministry of Interior (MoI) officials confirm that sporadic clashes continue between the Afghan forces and the Taliban militants in southeastern Ghazni city.

MoI spokesman Najib Danish said the Taliban militants have a presence in the western parts of the city and additional forces have been deployed to clear the city from the presence of the militants.

He ruled out that the presence of the militants in the outskirts of the city could pose serious threats to the capital provincial.

According to Danish, the security forces are busy conducting clearance operations and the city will likely be fully cleared until this evening or tonight.

However, he said the operations are slowly being conducted as the militants have taken position inside the civilian houses.

There are no reports available regarding the latest casualties toll inflicted upon the security forces and the Taliban militants.

Provincial security Chief Farid Ahmad Mashal had earlier said the dead bodies of at least 39 militants are left in the eastern parts of the city.

Provincial public health directorate officials had also said earlier the bodies of at least 16 people including two civilians have been shifted to the hospital along with at least 30 others who have sustained injuries.

According to the officials, at least 26 security personnel are among those wounded during the clashes.