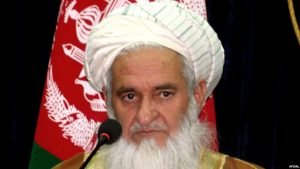 The Ministry of Interior of Afghanistan (MoI) confirmed the involvement of Afghan Ulema Council chif Mawlavi Qeyamuddin Kashaf son’s involvement in the deadly clash in a wedding hall in Kabul city.

MoI spokesman Najib Danish confirmed the deadly incident in one of the wedding halls in Kabul city as he was speaking to reporters during a press conference today.

Danish further added that the incident took place in Afghan Khyber wedding hall in the vicinity of Taimani area of the city.

He said the incident took place after a clash broke out between the son of Mawlavi Kashaf and a member of the supreme court of Afghanistan.

According to Danish, at least four people have been arrested in connection to the incident and an investigation is underway in this regard.

He did not disclose further information regarding the incident and it is yet not clear if the son of Mawlavi Kashaf has been arrested or not.

This comes as earlier reports indicated at least four people were killed and two others were wounded during the incident.

The incident in Khyber Afghan wedding hall has taken place amid growing concerns regarding the freedom of action of the irresponsible armed individuals in the key provinces, cities, and areas of the country.