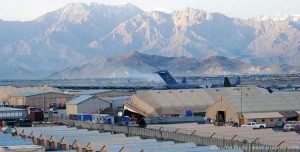 The officials furhter added that there are no reports regarding the casualties and damages as a result of the missile attack.

District chief for Bagram, Abdul Shakoor Qadusi confirming the report said militants fired nearly 12 missiles on US-run Bagram airbase, however, he said there are no reports regarding the casualties.

Mr. Qadusi further added that militants fired the missiles from the mountainous regions, and no suspect has been arrested in connection to the incident so far.

In the meantime, Taliban group claimed responsibility behind the attack and said heavy casualties were incurred to US military forces.

Mujahid further added that all the missiles landed on residential rooms inside the airfield, and the attack was carried out amid efforts by United States and it’s allies to have permanent bases in Afghanistan.

The Taliban spokesman also added US war planes carried out airstrikes following the missile attack, but the air raid did not incur any casualties to Taliban fighters.

In the meantime, The NATO-led International Security Assistance Force (ISAF) denied the Taliban claims regarding the casualties as a result of the attack.

ISAF following a statement said, “We can confirm a rocket attack by enemy forces at Bagram Airfield in Parwan, Afghanistan today. The enemy’s efforts were ineffective and there were no ISAF casualties or infrastructure damage as a result of this attack.”