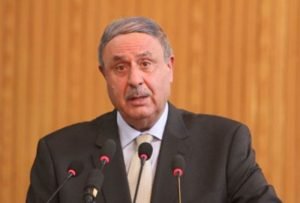 The minister of Inter Noor-ul-haq Uloomi has reportedly resigned from his position, apparently due to internal differences within the government.

According to sources privy of the development, the resignation of Mr. Uloomi has not bee accepted by the President so far.

The sources further added that Mr. Uloomi resigned from his position after his assignment of deputy interior minister was rejected by Chief Executive Officer Abdullah Abdullah.