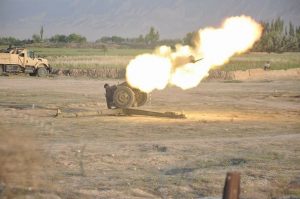 According to a statement released by Thunder Corps,at least eight militants were killed and seventeen others were wounded during a clash in Nani area of Andar district.

The statement further added that the clash took place as the Afghan forces were busy conducting clearance operations as part of the ongoing Nejat operations.

A rocket launcher, an assault rifle, a pistol, and a radio set were also confiscated by the Afghan forces following the clash, the 203rd Thunder Corps added.

At least three militants were killed in a separate clash in Meri area of the same district, the 203rd Thunder Corps said, adding that the Afghan Air Force also carried out airstrikes in Seni and Shaliz areas of the district.

According to the statement released by Thunder Corps, at least 15 militants were killed and 17 others were wounded during the same airstrikes.

At least ten motorcycles belonging to the militants were also destroyed in the airstrikes, the statement added.