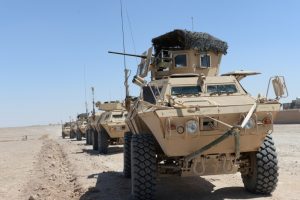 At least one hundred and fifteen people including militants and security personnel were killed or wounded during a clash in northern Faryab province of Afghanistan.

The 209th Shaheen Corps of the Afghan Military in the North said a large convoy of the security forces was ambushed by the Taliban militants between Ghormach and Qaisar districts at around 9:30am local time on Monday.

The source further added that ambush by the Taliban militants sparked heavy clashes that lasted for two hours, leaving at least 73 militants dead and 31 others wounded.

According to Shaheen Corps, a shadow district chief of the Taliban for Qaisar Mullah Shirin and six other Taliban commanders identified as Mullah Qayoum, Qari Sur Gul, Mawlavi Jan Mohammad, and Mawlavi Noor Mohammad were among those killed.

The Shaheen Corps also added that four security personnel also lost their lives in the attack and seven others sustained injuries.

The Afghan Air Force and coalition forces based in Afghanistan also carried out numerous airstrikes during the clash.