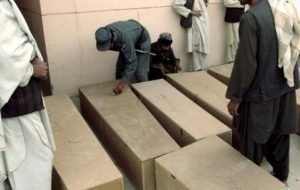 The anti-government armed militants have killed at least seven of a family in southern Kandahar province of Afghanistan, local officials said.

The incident took place late on Friday night in Shahwali Kot district after the gunmen stormed a residential house.

Provincial governor’s spokesman Samim Khpolwak confirmed that seven of a family including three women were killed in the attack.

Khpolwak further added that the incident took place in Kariz area of Shahwali Kot area and a gunman was also killed after the family responded to the attack.

He said the identity of the assailant yet to be confirmed and there are no reports regarding the main motive behind the incident.

No group including the Taliban militants has so far claimed responsibility behind the incident as earlier reports suggested that the Taliban insurgents were involved in the attack.

Kandahar is among the relatively volatile provinces in southern Afghanistan where anti-government armed militant groups are actively operating in a number of its districts.

The security situation had considerably improved in this province during the recent months despite Kandahar is known as teh birth place of the Taliban group.