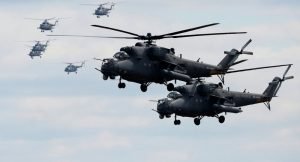 The Afghan President Mohammad Ashraf Ghani said Tuesday that the Mi-25s supplied by India prevented further deterioration of the security situation of the country.

Speaking during a joint conference of the leadership of security institutions, President Ghani said “The situation could further deteriorate if the Mi-25s supplied by India would not arrive on time.”

Hailing the Afghan Air Force (AAF) leaders for their efforts to provide air support to the Afghan forces during the ongoing fighting season, President Ghani said “We were forced to use the Mi-17 transport helicopters as gunships during the last Afghan fiscal year.”

President Ghani further added that the Afghan nation witnessed the re-establishment of the Afghan Air Force (AAF) during the ongoing fiscal year of 1395 and that led to an Afghan-owned decision making in providing air support to the fghan forces.

Emphasizing on the importance of the confernece, President Ghani said the Afghan security institutions should remain target oriented for the upcoming fiscal year of 1396 as they have passed a year of survival in 1394 and are in the process of going through the national mobilization to defend in 1395.

India started the delivery of lethal military equipment to the Afghan National Defense and Security Forces late in December 2015.

The Afghan Air Force received 3 of the 4 Mi-25 gunship helicopters late in the month of December last year which coincided with Prime Minister Narendra Modi’s visit to Afghanistan.

The Indian sources earlier said India is preparing the fourth gunship helicopter for the delivery to the Afghan armed forces and hope hope that the delivery will be done in the near future.

“The fourth helicopter is yet to be transferred. It needs spares before it can be made fully operational and the spares have to come from Russia,” diplomatic sources said.

The sources further added that efforts were on to fix the issue. “There was an issue with the spares. It is being sorted out. It should be delivered very soon,” a senior defence official said without specifying a timeframe.

According to reports, the four helicopters were taken from the inventory of the Indian Air Force (IAF) at the Air Force station in Pathankot.