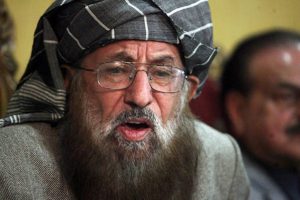 The Jamiat Ulema-e-Islam Sami (JUI-S) Chief Maulana Samiul Haq, also famous as the Father of the Taliban, has proposed talks between the Afghan Ulemas and the Taliban group in a secret location.

According to a statement released by Madrassah Haqqania, a delegation consisting of Afghan Ulemas and High Peace Council representatives, met with Maulana Sami during their visit to Pakistan on Sunday.

“As the Taliban consider you as a teacher, we want your mediation between the Taliban and Afghan government,” the statement quoted members of the delegation as telling the JUI-S leader.

Samiul Haq proposed a meeting of the scholars and the Taliban at a secret location without involvement of the Afghan government, Pakistan and the US, according to Daily Times.

“I think the Afghan rulers, former mujahideen leaders and the Taliban must agree on one point that is the withdrawal of the US and NATO forces and to liberate Afghanistan,” Samiul Haq told the Afghan scholars, according to the statement.

The Afghan Ulema Council and the High Peace Council of Afghanistan have not commented in this regard so far.