Maternal mortality rates declined from 1100 to 396 in Afghanistan: WB 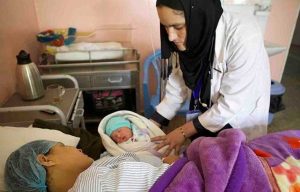 The World Bank informed regarding the gains in its latest report particularly pointing towards the unprecedented decline in maternal mortality and child mortality rates.

The report finds that such health gains have been made possible by expanded frontline health services and a stronger health system.

“For example, until 2010 in highly insecure provinces, the number of pregnant women who were seen by a health professional increased by almost 3.5 percent every year and the use of contraceptives and the number of births assisted by skilled professionals each increased by 2 percent per year,” the report states.

The report also analyzes the overall health system, measuring progress in six areas, including the knowledge of health professionals, the quality of medical infrastructure and equipment and availability of drugs and vaccines. All have shown sustained, though uneven, improvement since 2003.