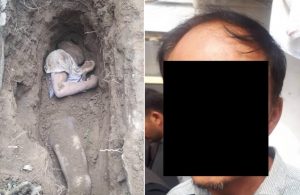 A man was arrested in Kabul city on charges of murdering his teenage son due to unknown reasons, the security officials in Kabul said.

The incident has taken place in the vicinity of the 6th police district of the city in Qala Bahadur Khan area.

The Kabul police commandment in a statement confirmed the incident and said the perpetrator was arrested on Thursday.

The statement further added that culprit has been identified as Ramazan son of Khudadad and original resident of Chamtal district of northern Balkh province.

According to the Kabul police commandment, Ramazan had murdered his son, the 16-year-old Mehdi, few days ago and had buried his body in the yard of his house.

Ramazan was arrested durng an operation conducted in the same and the body of his son was recovered by the security forces, Kabul police commandment added in its statement.

The main motive behind the incident has not been ascertained so far but reports regarding the latest distressing incident emerge amid a sharp rise in criminal related incidents in the key provinces and cities of the country, including capital Kabul, during the recent months.